I’ve written a lot about how much I like charity shops, both here and as an Oxfam Fashion Blogger. I even did a PhD on second-hand consumption although not precisely about charity shops. In particular, I’ve written about how charity shopping provides the ultimate guilt free shopping experience; reusing goods is environmentally sustainable, inexpensive, and every purchase delivers a donation to a good cause. It’s seems a win-win (for a more in-depth look at some of the contentious aspects of charity retailing, see Andrew Brooks’ work), but it’s easy to forget that charity shops are a very British affair. Whilst the US do garage sales and Europe have flea markets, no other country has the same kind of high street charity shops we do. Every year charity shops raise over £270m for a range of causes in the UK, so how did they start? And how has their purpose changed?

Charity retailing is the most conspicuously placed form of second-hand consumption with much fuss made over how they’ve increasingly encroached on the UK high street (they are exempt from the business rates that hold back many small retailers). Charity retailing can be traced back to the late nineteenth-century, when William Booth, founder of the Salvation Army organised for donated goods to be collected from well-off Victorian homes to then be sold at ‘salvage stores’ across London (Horne and Maddrell 2002). The primary purpose of this was to provide household goods and clothing to the poorest families, it was in itself a form of charity, but the idea has since been appropriated as a fundraising activity and way for charities to increase their public presence. The first of these sort of shops was opened by Oxfam in 1947.

Charity shops as they exist today boomed in the 1980s and there are now estimated to be over 11,000 shops in the UK linked to a whole host of local and national charities. Stores have become more professionalised and more closely aligned to first cycle sites of exchange, borrowing many standard retail practices such as size ordering of clothes, mannequin displays, online sales and selling new goods such as Fairtrade food, cards and batch items donated by major high street brands. A significant way in which charity shops are run differently to other retail outlets however is their strong reliance on volunteers. It has previously been estimated that charity shop volunteers alone contribute approximately £150 million worth of labour annually, calculated at the UK national minimum wage (Goodall 2000).

Although the primary purpose of charity shops is to raise funds for the charity concerned, there is still a suggestion that these types of shops have a duty to provide for the less well-off in society. The shift to more professionalised services however, has led others to muse over the prices of charity shop goods. I remember seeing a worn Primark dress in a London charity shop for £9. It seemed steep, but the volunteers expected it to sell to an overseas shopper, unaware of the Atmosphere label. Is this ethical? Where should the shop’s priorities lie? Do you think they should do whatever they can to fundraise for the charity or do they also have a moral obligation to serve the local community? The charity sector have little reason to change their model because it works. Despite the easy availability to inexpensive new goods, and the growth in online second-hand economies, the British love affair with charity shops shows little sign of waning.

A first for fashion trade magazine, Drapers, as they featured a charity shop in their weekly double page shop review. This is a HUGE development. Charity shops have for far too long had a stigma attached to them, especially amongst the youth. There will always be people who won’t step foot inside a charity shop perhaps because they think they are for old people, poor people, or they simply don’t want to wear second hand clothes. Personally I think charity shops are the ultimate in guilt free shopping – you are recycling and diverting textiles from landfill, giving money to a good cause, and spending out less money than you would for a brand new item.

Charity shops have benefited from the upsurge in demand for vintage pieces no doubt, and as the article in fact says, the best charity shops should feel more like vintage boutiques than dowdy charity shops. Mary Portas tried to change the fortune of charity shops around in her series Mary Queen of Charity Shops, and her influence can now be spotted in shops up and down the country. The shop review in Drapers is a Mary Portas/ Save the Children collaboration. Positioned in Primrose Hill, it should attract donations from the well heeled types living and working in the area. They also rely on donations from the big brands, next month hosting a Rigby and Peller event.
Charity shops cannot meet all needs, they don’t suit the time poor or those looking for a particular item, but if you do find a gem in your size it does leave you feeling a bit smug. 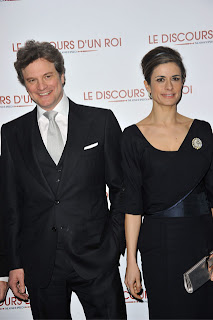 Livia Firth, eco-fashion pioneer and wife of Colin Firth, has started the ‘Green Carpet Challenge 2011’. Basically the idea is that whenever Livia has a red carpet event to attend with Colin, she will only wear ethical outfits. It’s a fantastic idea as it proves that ethical fashion can be just as glamorous and special as mainstream fashion. For the premiere of ‘The King’s Speech’ Livia wore a Junky Styling creation, a stylish black tailored dress up-cycled from one of Colin’s old suits! She will be wearing a Tussah silk Prophetik gown to the Golden Globes designed by Jeff Garner, but we will have to wait until Sunday to see what it looks like. It’s well worth following Livia’s vogue blog http://www.vogue.co.uk/blogs/livia-firth/default.aspx.

Talking of challenges, I have set myself the goal of not buying any brand new clothes this year, unless completely necessary. This will mean making use of what I have, and scouring the charity shops (which is great fun anyway). Time will tell as to how I define ‘necessary’!

If I do need to buy anything, Eco-Age the Chiswick store founded by Livia Firth, Orsola de Castro, Lucy Siegle and Jocelyn Whipple will no doubt relieve any feelings of guilt.

Last night I watched the first episode of a fascinating new three part documentary, ‘The Food that makes Billions.’ It explores how companies have made billions branding and selling everyday items, such as water, cereal and yoghurt. The big question in last night’s programme was, is it right to be making money from selling water when millions of people across the world don’t have access to clean water? And then there is the absurdity in bottling water in one country and shipping it to another country, in a plastic bottle.

Amongst the Evian and Pure Life, however, was One Water. One Water comes at the market from a totally different angle as they are part of a charity that works with communities in Africa to address their humanitarian needs. What a fantastic idea! I suggest looking out for this when you next get thirsty, and you will be helping an African family have safe drinking water. It also reminded me of a few years ago when I did conservation work in Honduras. I helped with a recycling project while I was there, sorting through plastic bottles that had been left in the recycling bins, or collected from the beach. Bottled water was necessary there, compared to at home, but the bottles still made a horrible mess – it wasn’t a fun job.